If your child has become withdrawn and more agitated than usual or is missing/skipping school or you are seeing grades deteriorate you might be seeing signs of substance abuse in your teenager. It can be hard to recognize the difference between a drug or alcohol abuse problem and the normal changes an adolescent faces during puberty.

What are the Dangers of Teenage Substance Abuse? 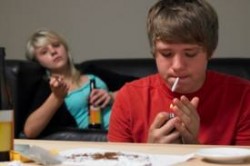 Teenagers may engage in more risky behaviors under the influence of substances.

Teenage substance abuse is extremely dangerous in many ways. Different substances can cause a variety of health problems for the user. Marijuana use slows down cognitive thinking and can cause poor decision making and lack of concern for responsibilities. Smoking marijuana also damages lungs and can lead to asthma and COPD. Drinking alcohol also inhibits proper decision making and is destructive to the liver and kidneys. It can lead to diabetes and hypertension. It can also lead to drinking and driving or drinking and operating heavy machinery which can prove to be deadly and put others in danger as well.

The most frightening of all is that many teenagers are finding the most addictive drugs in their own medicine cabinets. Prescribed pain relievers and anxiety depressants are often taken right under parents noses in their very own homes. Medications for old injuries and past surgeries might sit around unmonitored and readily available for teenagers to take and use to intentionally get high such as Xanax, Percocet, Oxycontin, Vicodin and codeine.

Many medications prescribed to control pain are actually very strong narcotics and are highly addictive to people who use them especially when used for recreation rather than pain control. It is recommended that parents throw away any unused portion of medication once they discontinue using it rather than letting it sit around putting it in the hands of people who might abuse it.

How Can Substance Abuse Effect My Child?

Teenage substance abuse can affect every aspect of a young person’s life. It can cause them to change the people they associate with, the clothes they wear and music they listen to. They might become angry with you and lash out at other family members for what seems like no reason and there just seems to be no getting through the dark wall they have built around themselves. It is urgent that a parent recognize the signs of teenage substance abuse and seek the proper treatment care their child. It is essential to take your child to your family doctor and let them know you fear your teenager might be using or addicted to drugs. The doctor can confirm drug use with urine and blood tests and then guide you in the right direction for help.

According to NIDA, “illicit drug use among teenagers remains high, largely due to an increasing popularity of marijuana”. While use of Marijuana by teenagers declined from the 1990’s to the 2000’s it has steadily been on the rise. Studies are showing a trend in marijuana use in adolescents with nearly 6.5 percent of 12 graders using the every day, in comparison with only 5 percent in the mid 2000’s.