Although smoking pot has become somewhat acceptable in some states, it is still unknown just how bad marijuana abuse can really be. For some, casual use of marijuana never really amounts to a big concern, but for others, marijuana use is not only problematic, it often becomes a gateway to other forms of substance abuse and creates serious risks for the user.

People who abuse marijuana are at risk of lung disease, digestive problems, psychological problems and an array of legal complications in most states. Unfortunately, the dangers don’t end there—chronic use of marijuana has been linked to mental illness, and according to the National Institute on Drug Abuse, “it’s effects on thinking and memory may last a long time or even be permanent.”

Recreational Use or Abuse?

Some people believe that marijuana can be used for recreational purposes without any real eminent danger as long as it is not abused or used chronically. However, like other substances, just like alcohol, abusive use of marijuana can be dangerous and hazardous to the user’s health. If you’re not sure if you are using marijuana chronically, consider this: 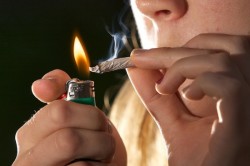 Despite its popularity, marijuana can lead to dependence, as well as health-related and lifestyle problems.

According to NIDA, marijuana use has been linked to cardiopulmonary and mental health related problems. The effects that marijuana abuse has on women can be lifelong causing an array of problems with cognitive function, memory, the heart and the mind.

Smoking marijuana irritates the lungs and can lead to similar respiratory problems as those that a cigarette smoker experiences. Cough, phlegm and frequent lung infections are likely in women who smoke marijuana on a regular basis or for a prolonged period of time. This drug even contributes to the increased risk of lung cancer which is a potentially deadly disease without a known cure.

Cardiopulmonary effects of marijuana abuse include an increased risk of heart attack, high blood pressure and damage to the heart. Marijuana is said to increase the heart rate but as much as 100 percent. This puts users at risk of a number of potentially serious heart related problems and increases the risk of heart attack more than 400%.

Studies have also linked chronic marijuana use to mental illness. Smoking pot can cause temporary psychosis and may worsen symptoms of mental illness in those who already have an underlying condition such as schizophrenia or anxiety. Women who begin smoking pot when they are young are at an increased risk of serious problems in the future.

Research estimates that as many as 10% of women who smoke pot regularly become addicted. The number is increased to about 17 percent for those who begin in their teen years or at a young age. Unfortunately, the vast majority of women who become addicted to pot do not get the help or treatment that they need to heal and overcome the addiction—as such, many women abuse pot regularly for countless years as a result of the early onset of addiction that occurs.

Treatment for marijuana addiction is first focused on helping the user to cope with withdrawal symptoms without resorting back to the use of the drug. According to the National Cannabis Prevention and Information Center, “one of the most common symptoms of marijuana dependence is the experience of discomfort when ceasing use known as withdrawal.” Withdrawal symptoms generally begin within the first day after the user quits and will peak within 3 days or so—symptoms then gradually dissipate.

The most common symptoms of marijuana withdrawal that are treated in rehab include:

Although symptoms of marijuana withdrawal are in no way life threatening, they can be difficult to cope with. Treatment involves providing proper nutrition, support and sometimes medication to help ease the negative effects of the withdrawal so that the use can rest and focus on his or her recovery.

Women who are addicted to marijuana have various options for treatment. Initially, detox will be the first step toward getting sober and to focusing on the mental recovery that must take place in order to remain sober. A number of treatment options exist to help including:

According to NIDA, “research shows that marijuana may cause problems in daily life or make a person’s existing problems worse. Heavy marijuana users generally report lower life satisfaction, poorer mental and physical health, more relationship problems, and less academic and career success compared to non-marijuana using peers.” Treatment can help to restore some of the missing balance and provide counseling for both the problems that have been caused by the decision to smoke pot as well as for the problems that may have been underlying prior to the use of the drug.