Eating disorders are often overcome through treatment, while in some cases people relapse and in other cases it can be very hard for a person to overcome their eating disorder for any period of time.

Individuals with anorexia nervosa, also referred to just as anorexia, have intense fears of gaining weight and take actions to prevent it. They will think about food and eating very often and will take serious measures to limit the amount of food they eat. According to the US Office on Women’s Health, anorexia is also about more than just food; it’s about control. By strictly controlling their food intake, people with anorexia may feel more in control of life and ease tensions and anxieties they normally experience.

Symptoms of anorexia include:

There are other behaviors that can help a person identify anorexia, according to the National Institute on Mental Health. Someone with anorexia may portion their food carefully and move food around on their plates to make it seem like they ate more than they did. Another sign of anorexia is frequent weighing, where someone will step on the scale very often. Others may exercise excessively, misuse laxatives, or self-induce vomiting. In addition, someone with anorexia may be cold often, and will wear several layers of clothing because of this, and because of the desire to cover up their body.

Potential consequences of anorexia include: 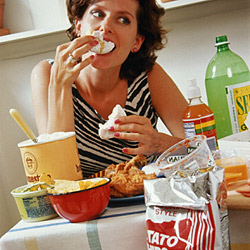 Each of the three most common eating disorders involves restricting or being unable to control one’s food intake.

Bulimia nervosa is another type of eating disorder. This is characterized by having recurrent and frequent episodes of eating large amounts of food and feeling a lack of control over it. Binge-eating in cases of bulimia is followed by behavior that compensates for this kind of eating, such as forced vomiting, excessive and deliberate use of laxatives, fasting, excessive exercise, or a combination of these things.

People with bulimia tend to maintain a healthy weight, unlike people with anorexia, and some people are slightly overweight. Individuals with bulimia normally desire to lose weight and express unhappiness with their weight, shape, and size. According to the National Institute of Mental Health, binge and purge cycles take place anywhere from several times a week to many times a day.

Signs of bulimia nervosa include:

According to the US Office of Women’s Health, people with bulimia often have other mental health conditions including depression, anxiety, and substance abuse problems.

Binge-eating disorder is an eating disorder in which people entirely lose control over what they are eating. It is different from bulimia, however, and periods of binge-eating are not followed by weight loss efforts such as purging, excessive exercise, or fasting. As a result of their behavior, binge-eaters are often overweight or obese.

Given the fact that binge-eating disorder often leads to weight gain and obesity, it can also cause related issues. Obesity raises the risk for type 2 diabetes, high blood pressure, high cholesterol, gallbladder disease, heart disease and certain types of cancer. According to the Office on Women’s Health, binge eaters also often are affected by anxiety, depression and/or personality disorders.

The foundations of all eating disorder treatment are teaching and encouraging adequate nutrition, stopping purging behaviors, and reducing excessive exercise. Psychotherapy (talk therapy) and medications are effective across many different cases of eating disorders.

According to the National Institute on Mental Health, all treatment plans for eating disorders should include:

Problems caused by malnutrition, obesity, and purging would need to be addressed on an as-needed basis. For example, if someone with binge-eating disorder developed diabetes they would require treatment for that condition, as would a person with anorexia who developed osteoporosis.

This is most often done through family, group, and individual psychotherapy along with medical monitoring and nutritional counseling. In some cases, medications may be prescribed as well. Antidepressants, antipsychotics, or mood stabilizers have shown to help resolve the mood and anxiety aspects of eating disorders for some people.

According to the American Psychological Association, a special family therapy approach called the Maudsley approach is regarded as effective as well, especially in adolescents. In this approach, counselors work with patients and their parents, and enlist their parents to encourage healthy eating and to take responsibility for their child’s eating.

Treatment for bulimia nervosa is similar to that for anorexia. It often involves a combination of psychotherapy, nutritional counseling, and may involve medications. Bulimia treatment, however, sometimes involves cognitive-behavioral therapy (CBT). CBT is used to help individuals identify patterns of thought, behavior, and belief that lead them to binge and purge. When identified, counselors work with patients in helping them change these patterns and to avoid their dangerous behaviors of binge eating and subsequently purging.

In addition, treatment should identify any residual effects of bulimia and help the patient to remedy these effects.

Binge-eating disorder treatment is very similar to bulimia nervosa treatment. CBT that is tailored to the individual, whether given in individual or group environments, has been shown to be effective in helping people control their binge eating. Medications, especially antidepressants, may be helpful as well.

As with the other eating disorders, treatment for binge-eating disorder must address any potential side effects or consequences of the disorder, such as diabetes.

There is no one exact cause of eating disorders, though there are many potential contributing factors. These illnesses are serious medical conditions that manifest in both mind and body. Some factors that contribute to the development of eating disorders are:

The prevalence of eating disorders in America is fairly well documented, as are statistics concerning the age, race, and gender of people with the disorder. It seems that eating disorders affect women much more than men, and typically have their onset in adolescence or young adulthood.

Here are some eating disorder statistics that explain their prevalence:

If you or someone you love is suffering from an eating disorder find help now. The health complications and consequences of eating disorders are very serious, and can lead to premature death. Help is available to you!