Anorexia Symptoms to Be Aware Of

Anorexia is a very serious disorder that affects many women. In fact, according to the OWH, “85-95 percent of anorexics are female.” These statistics are devastating as anorexia can not only disrupt a person’s life and relationships, but it is a debilitating illness that can actually result in the person’s death. If you believe you or a woman you know may be anorexic, be aware of the symptoms and reach out.

Anorexia nervosa is an illness that causes many women to intentionally starve themselves as they have “an intense fear of gaining weight” (OWH). It can occur in women of any race, ethnicity, or age group, although young women are often the ones affected by it. It is usually caused by an unhealthy body image and ideas about how one should look, but often, it is also “a way of using food or starving oneself to feel more in control of life and to ease tension, anger, and anxiety.” Anorexia is a complex and dangerous eating disorder, and the longer it goes on, the harder it is to stop. 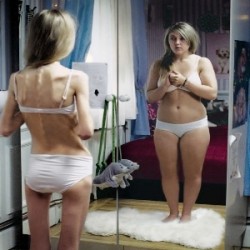 One of the most obvious physical anorexia symptoms is thinness. But a person who is anorexic often has a body of “extreme thinness” to the point of emaciation (NIMH). This is especially true the longer the disorder goes untreated. Other physical signs of anorexia are:

These physical symptoms can become worse and may even lead to death if the woman is not treated for anorexia.

Women who are anorexic will also behave differently from those who are not. Some of the behavioral signs of anorexia are:

The behavioral anorexia symptoms will make a person seem suspicious, as if she has something to hide. She will not want to discuss her eating habits with anyone.

A woman who is anorexic may believe that:

Anorexia can lead to problems that are not immediately solvable, but through treatment, a woman can regain her life from anorexia. It is important to seek treatment as soon as possible for this disorder.