Addiction and Eating Disorders: Why More Women in Rehab are Facing this Dual Diagnosis

Many people are surprised to learn that eating disorders are incredibly common among women who abuse drugs and/or alcohol; they are generally five times more likely to suffer from one than the average population. Researchers estimate that roughly 50 percent of people with an eating disorder also have a substance use disorder. Diagnosing and treating both conditions is vital as they are linked to higher than average mortality.

For women suffering with a dual diagnosis that includes and eating disorder, treatment is clearly vital, and it must be quality care. One of the best options available is rehab for women, where the clinicians and staff are specialists in both eating disorders and addiction in the female populations. Whereas a gender blended rehab will have knowledge of both, a women’s rehab will have treated considerably more patients with this dual diagnosis and will be experts in female health and wellness.

To learn more about the ways that female rehab treats both addiction and eating disorders, call 800-681-7642 Who Answers?. Our experts can answer all your questions and they will do so in a plain, easily understood manner. You don’t have to wade through terminology or jargon.

What Factors Influence This Dual Diagnosis? 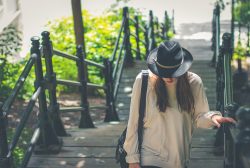 Genetics play a major role in one’s risk of developing an addiction or eating disorder.

Both substance abuse and eating disorders are the result of factors that include:

The more risk factors a person experiences, the higher their likelihood of developing an eating disorder or addiction.

Some researchers assert 40 to 60 percent of a person’s vulnerability to addiction are the result of genetics, which includes the impact of the environment on gene function and expression. In addition, there have been findings that show an overlap in neurotransmitters—the chemical that send messages throughout the body—shared by both substance use and eating disorders.

Does One Cause the Other?

When it comes to dual diagnosis, women who suffer from both addiction and disordered eating may want to determine the direction of onset. Which came first? There is no clear causal relationship that is consistent. The National Institute on Drug Abuse offers up the most common scenarios:

For some women, drug and/or alcohol use may cause a decrease in appetite that brings about substantial weight loss, and that can trigger the beginnings of an eating disorder. Other women may have an eating disorder and begin using drugs as another way to control their weight. Still other women may use both drugs and disordered eating as avoidance-based coping.

What Can Women’s Rehab Do?

Early intervention and correct diagnosis are essential to treating dual diagnosis patients. Often, an eating disorder and an addiction can have overlapping symptoms, making it hard for clinicians to separate one set from the other. This complicates diagnosis and treatment. But, a women’s rehab is more than averagely familiar with both condition because they encounter them frequently and remain up-to-date on the issues that affect women.

To learn more about the advantages of a gender specific rehab for women, call 800-681-7642 Who Answers?. A failure to diagnose or treat a dual diagnosis can literally compromise the chance of recovery. Give yourself the best chance of a positive outcome.