Compulsive overeating disorder, also called compulsive eating or binge eating disorder, is a mental disorder that causes individuals to eat more than they need or more than they want to on a regular basis. According to the Office on Women’s Health, “About 2 percent of all adults in the United States (as many as 4 million Americans) have binge eating disorder.” The disorder “affects women slightly more often than men,” which is one reason why it is important for women to know and be able to recognize the signs and symptoms of this behavior.

Like addictions and other types of mental disorders, compulsive overeating disorder is more likely to occur in individuals with specific traits. Although this is not a certainty for every individual, women who experience issues associated with those listed below are more likely to develop this problem.

If you notice these traits in yourself or another woman you know who may be overeating compulsively, it is a sign that she could be struggling from this affliction.

People assume that someone who is struggling with this issue must be overweight. It is often likely, but only “about two thirds of persons who have binge eating disorder are obese,” according to the National Library of Medicine. In fact, an average or underweight individual could also have compulsive overeating disorder. This often occurs when a person suffers from both compulsive eating disorder and bulimia nervosa.

However, there are a number of physical problems that often occur as a result of compulsive overeating disorder. These include:

These physical issues may be the result of obesity, but they can also be caused by the types of food the individual eats. “With binge eating, a person often eats unhealthy foods that are high in sugar and fat and low in nutrients and proteins.” Because of this behavior, individuals who are not overweight may still experience these physical problems because they are not putting the proper nutrients into their bodies.

Many of the signs associated with this mental disorder involve behavior. When a woman struggles with compulsive overeating, it means she cannot control the amount she eats. She may therefore eat constantly, eat when she is not hungry, or eat more than she needs or wants to eat in a single sitting. This can lead to severe problems, but it is a behavior she will not be able to control. 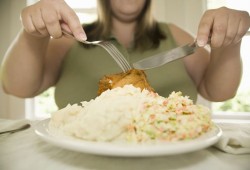 Eating a large amount of food very quickly is a sign of Compulsive Overeating Disorder.

Other behavioral signs of compulsive overeating disorder include:

Overeaters often feel embarrassed about how much they eat. In many cases, they realize that what they are doing is unhealthy, but they cannot stop. As a result, women who have this disorder will avoid eating with others or telling others what they have eaten because they are so uncomfortable or embarrassed.

This can also lead to feelings of shame, as many women feel humiliated by the disorder and what it is doing to them physically, psychologically, and emotionally. It is not uncommon for someone to feel guilty right after consuming a large amount of food, which is what often leads to the co-occurring issue of bulimia, causing the individual to purge the food she has eaten. Many women also feel ashamed or disgusted by their bodies, which can lead to poor self-esteem and other problems.

If you notice these behaviors or feelings in yourself or a friend, there is a strong possibility that compulsive overeating disorder may be to blame. The main behavioral symptom, though, revolves around control. Women who binge eat every once in a while or feel that they can control their food intake are likely not suffering from this disorder, but those who do feel they have no control over their actions likely are.

Do I Have Compulsive Overeating Disorder?

If you answered yes to most of these questions, there is a possibility that you may be suffering from compulsive eating disorder. The signs and symptoms of compulsive overeating disorder often go overlooked, but if you realize you exhibit many of them, make an appointment with your doctor to discuss the issue in order to make a change for the better.