Understanding the Types of Eating Disorders

According to the NLM, “women are more likely than men to have eating disorders.” Because of the pressures caused by the media, society, and even by themselves to look a certain way, women develop eating disorders that can be very detrimental to their health.

What are Eating Disorders?

The NLM states that “eating disorders are serious behavioral problems.” Under or overconsumption of food coupled with the “extreme concern about… shape or weight” are the main symptoms of an eating disorder. Because women become unhealthily concerned with their weight and looks usually as a precursor to eating disorders, they often occur along with “depression, anxiety disorders, and substance abuse.”

The NIMH explains that many women with eating disorders “may have started out just eating smaller or larger amounts of food, but at some point, the urge to eat less or more spiraled out of control.” An eating disorder is similar to the often concurrent disorders listed above as it becomes so ingrained in a woman’s actions that she no longer can control it, tries to ignore it or downplay its severity, and often cannot stop on her own even if she tries. These are the three most common types of eating disorders:

Anorexia nervosa can lead to brain damage, infertility, damage to the heart, and “multiorgan failure.” The longer a person goes untreated for anorexia nervosa, the worse and more dangerous the condition will become. 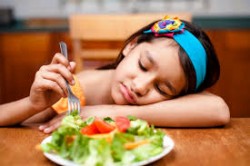 It is common for the eating disorders to develop in adolescence.

A woman with bulimia nervosa has binge eating periods that she often feels she cannot control. Afterwards, she uses laxatives or forced vomiting to purge the food she has eaten. The symptoms of bulimia nervosa are:

Women with bulimia “can fall within the normal range for their age and weight,” but still require treatment as the physical and psychological effects of the disorder are dangerous (OWH).

Binge-eating can also be treated like the other eating disorders. The sooner treatment begins, the easier it will be for a person to heal and recover from both the physical and psychological effects caused by eating disorders.