When a friend or loved one is suffering from heroin abuse, the first step that can be taken to help her is to understand the addiction and the drug itself. Friends and loved ones should attempt to understand what women abusing heroin are experiencing in order to get them proper care and treatment. At the same time, heroin users should understand that the addiction is not an easy one to break and that there are many factors to their abuse, as well as options for treatment.

Heroin is a semi-synthetic opiate. Opiates, as specified by The Department of the Interior, are characterized as drugs that:

Opiates get their name from the opium poppy plant. Heroin is made from morphine which is found in the seed pods of these plants. It can be recognized as either whitish brown powder, or a black, sticky goo. The second appearance gives it the nickname “black tar.”

Some other names for heroin include: 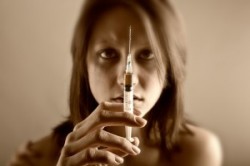 Heroin is a dangerous, addictive drug. It’s abuse can lead to many problems, including death.

Recreationally, heroin is utilized for its euphoric high and its ability to quickly reach the brain. According to The US National Library of Medicine, “this makes it very addictive.” Heroin gives a user an extreme initial high that she is always trying to find again by continuing to do the drug, and this search facilitates the addictive nature of the drug. The Mayo Clinic attests that heroin “causes addiction faster” than certain other drugs do, simply due to the nature and the preparation of the drug.

Once heroin enters the brain, it is converted back to morphine. Opioid receptors exist all throughout the brain, and the newly-converted morphine binds to them, giving the user a “rush” of emotion (strong euphoria), “accompanied by dry mouth, a warm flushing of the skin, heaviness of the extremities and clouded mental functioning” (The National Institute on Drug Abuse). This impairment of the opioid receptors also endangers the user’s automatic bodily functions. Blood pressure, arousal, and even breathing can be impaired in a heroin overdose, which adds to heroin’s high overdose fatality rate.

According to The National Institute on Drug Abuse, “in 2011, 4.2 million Americans aged 12 or older (or 1.6 percent) had used heroin at least once in their lives.” Heroin has an estimated “23 percent” dependency rate, where users then become regular users, dependent on the drug.

The Coalition Against Drug Abuse estimates that “a heroin addict spends at least $150 a day supporting his or her habit” and that “heroin overdoses accounted for 164,000 emergency visits” in the year 2006.

Heroin can be injected, snorted, sniffed, or smoked. The user is often fascinated by the process of preparing the drug, and its effects include a particular apathetic feeling toward all aspects of life not related to the drug. These behaviors, coupled with the drug’s highly addictive nature, make it very difficult for a heroin user to stop once started.

Once injected into the body, heroin’s effects last for about three to six hours. While the detection time is only up to two days, there are many signs and symptoms that could point to heroin abuse in women.

The most obvious is the presence of heroin-related paraphernalia. According to The Department of the Interior, these can be “needles, syringe caps, eyedroppers, bent spoons, bottle caps, and rubber tubing.” These are mostly used in the act of preparing the drug for injection, but heroin can also be snorted or smoked. Tissues dotted with blood and an abundance of used matches, when found in the home of a suspected individual, can be additional signs of heroin abuse.

The drug and its corresponding high reach the brain in a short amount of time due to heroin’s particular methods of preparation. Because of this, many users will exhibit extreme changes in behavior. Heroin users can be spotted by:

Their moods vary immensely, fluctuating between highs and lows, but reaction times and reflexes will remain slow as fatigue sets in from the constant changes in mood. A prevalent feeling of indifference or apathy is another symptom, caused by the opiates in the drug, and the individual could exhibit signs of fatigue or “increased sleeping.” As stated by The Coalition Against Drug Abuse, the heroin abuser might become untrustworthy, being more prone to lie or become unreliable and negligent in school or the workplace, as the drug abuse has given him or her feelings of apathy toward life in general.

Women addicted to heroin will most likely experience severe weight loss due to a lack of appetite, as well as constant mucous or runny nose and disorientation. Their physical behavior might also include scratching or picking at scabs on the skin, contracted pupils, and slurred speech. It is also very common to display signs of nausea which will most likely lead to vomiting and diarrhea. A heroin abuser can also be expected to wear long sleeves and pants, even in warm weather, in order to hide track marks.

Other side effects may be used to recognize heroin addiction in women, including scarred veins, kidney or liver disease, and infections of the heart, especially in the valves and lining. Any of these other medical issues, when combined, could point to heroin abuse. Though not necessarily signs of recent drug use, these effects can be present in long-term heroin abusers.

Women exhibiting many of these signs could very well be heroin users, but different people have varying reactions to the drug. While there are other signs which are more specific to individual cases, these are the most common signs and symptoms of heroin abuse.

Heroin abuse is still very harmful and prevalent in today’s society, and there are many options for a woman to find treatment for herself or a loved one. With the many different possibilities for aid and treatment, reaching out is important, and overcoming heroin abuse is very possible.

There are many medications for treating women addicted to heroin, as recommended by The National Institute on Drug Abuse.

The Coalition Against Drug Abuse states that “inpatient programs are an ideal option” for many women suffering from addiction. Providing the heroin abuser with a controlled environment, an inpatient program will keep a patient in a facility for a certain amount of time. Women suffering from a heavy addiction to heroin would most benefit from this treatment, as they can be monitored and sure of their surroundings.

Outpatient programs are also very important, as they can become constant parts of the healing process. Women who have undergone and completed an inpatient treatment might still need care in their day to day lives. Outpatient treatments may consist of therapy or counseling but in a less structured environment, perhaps even one where a woman could maintain family or work commitments while still receiving treatment. It is also a more anonymous environment, and women choosing this method would not have to explain their treatment program to others if they are not comfortable.

Women looking for treatment for heroin abuse have many options. Help is possible and, in many cases, essential to recovery.