Methamphetamine, also known as crystal meth, ice, or meth, is a growing problem in the United States. Meth abuse has spread widely, and is affecting many people across different walks of life. Meth is an addictive stimulant that is snorted, smoked, or injected for its effects. According to the Substance Abuse and Mental Health Services Administration, abuse of methamphetamine is associated with serious health and psychiatric conditions including heart and brain damage, impaired thinking and memory problems, aggression, violence, and psychiatric behavior.

Initially meth makes users feel euphoric, with a rush of good feelings, but once the high wears off users feel angry, afraid, or generally edgy. The highs of methamphetamine are very intense, and the lows are equally intense, but in a negative way. Meth users develop a tolerance to the drug, which means that they need more of it to achieve the same effect after some time. It also has withdrawal effects that make users who are dependent on meth feel sick and depressed when they do not have it. All of these factors lead to addiction.

Meth is known by a number of street names. It’s important to be aware of these slang names for meth, so as to be aware if someone is talking about it in your presence. These names include:

There are certainly other street names, as well, but it can be hard to keep up with the ever-changing drug landscape. Things change quickly as law enforcement and other authority figures catch on.

If you believe that someone you love may be using meth, they will likely display some of the signs of meth abuse. Drug abuse and addiction are often hidden, and people affected directly by them tend to lie to protect themselves and others, fearing that people will try to get them to stop. With this in mind, it’s very important to be aware of the signs yourself. In addition, meth is a highly addictive drug with very serious long-term effects. If someone you love is using, it is important to get them help as soon as possible to mitigate the potential damage done by the drug.

Tweaking: The Most Dangerous Stage of Meth Use 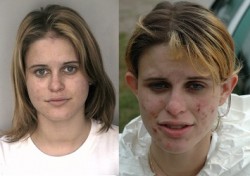 Abuse of methamphetamine causes very serious problems. One possible side effect is sores that develop due to compulsive scratching of the skin.

According to the University of Maryland Center for Substance Abuse Research, the most dangerous stage of meth use occurs when a user has not slept for three to 15 days. At this point, which is when a person would be labeled a ‘tweaker’ and would be said to be ‘tweaking’, users are very irritable and paranoid. They crave more methamphetamine, but are unable to reach their original high and thus become very frustrated and unstable.

It can be hard to tell if someone is tweaking, but it is important to be aware of as tweaking has been known to cause domestic disputes, car accidents, and spur-of-the-moment crimes. Though a tweaker may appear normal – with clear speech and brisk movements – a close look would show that their eyes are moving extremely fast, their voice may slightly quiver, and their movements would be quick and jerky.

Meth abuse can lead to a number of very serious health problems, in addition to problems with the law, in personal relationships, at work or at school. Meth abuse can quickly lead to addiction, which is a chronic, progressive, and relapsing condition that people often have to battle with for their whole lives. Methamphetamine causes significant long-term cognitive damage that takes years to fully repair.

Consequences of meth use include:

The Effects of Meth Abuse

Meth’s effects are created in part by the drug’s interaction with the brain. Methamphetamine causes a release of the neurotransmitters dopamine and serotonin which produces the intense rush that users feel. These neurotransmitters are very important for regulating emotion, mood, and movement. After the rush, the brain stays in an alert state and keeps the user’s body on edge. After the effects wear off, the brain is depleted of dopamine. This often causes a severe depression that makes users seek out more meth. It also causes reduced motor skills and impaired verbal learning, according to the National Institute on Drug Abuse.

Meth causes many physical effects on both the inside and outside of most users. While all users will have different experiences, certain changes to the outward appearance are common. These include:

Meth is associated with a number of psychological side effects which worsen with the severity of a person’s abuse problem. High doses are associated with increased nervousness, irritability, paranoia, and psychosis. These psychological side effects are sometimes likened to the symptoms of Parkinson’s disease or schizophrenia. Anxiety, confusion, insomnia, mood disturbances, and violent behavior are common as well.

The interaction between meth and the brain cause other significant effects. According to PBS Frontline, meth abuse destroys dopamine receptors over time. This makes it impossible for chronic users to feel pleasure without the help of the drug. This is part of what causes severe depression.

Meth abuse is a growing problem in the United States. It was formerly more common in the western and south-western US, but is spreading eastward.

Treatment for Meth Abuse and Addiction

Meth abuse and addiction is best treated with behavioral therapies, such as cognitive-behavioral therapy and contingency management, according to the National Institute on Drug Abuse. The Matrix Model in particular has shown to be effective, for example. This is a 16-week program involving behavioral therapy, family education, individual counseling, 12-step support, drug testing and encouragement for non-drug-related activities.

Counseling sessions are normally conducted in either one-on-one or group settings, and family counseling is often involved. Family counseling helps to motivate a person’s recovery, and to help the family understand their loved one’s situation vis a vis meth abuse and addiction, as well as how they can help.