The abuse of methamphetamines remains one of the most serious forms of drug addictions anyone can have. Meth use often becomes excessive after prolonged usage, because it takes more of the drug to produce the feelings of pleasure that your body has begun to associate with the drug. Once you are addicted, the drug will often become your only source of pleasure, making a normal life almost impossible.

Methamphetamine addiction may cause serious damage to vital organs, such as the liver, lungs and kidneys. Abuse of this drug is often accompanied by several unpleasant symptoms which worsen if usage becomes chronic.

Symptoms of methamphetamine abuse, include: 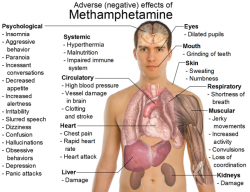 Methamphetamine and Your Brain

Abuse of methamphetamines often causes a change in the physical structure of the brain. The dopamine system within the brain which is responsible for verbal learning and motor speed are often severely hampered by abuse of this drug. The result is that your reflexes will become impaired and your speech and thoughts may be negatively affected.

Several sections of your brain associated with emotions and even memory may also feel the impact of abusing meth. The impact on the brain often causes the violent mood swings that most chronic abusers experience. The physical altering of the brain is one of the most dangerous side effects of this drug.

Blood vessels in the brain may become damaged with prolonged use. This can lead to several other serious health problems which may include, stroke and the collapse of the blood vessels in the heart. Organ collapse is the deadliest consequence of abusing this drug.

Methamphetamines and Your Heart

According to MethProject, methamphetamines speeds up the heart, and with extended use, it can cause a host of problems, including heart and organ failure. It can also damage the way the nerves conduct electricity, creating a condition known as arrhythmia.

The potentially dangerous effects of meth usage on your heart is one of the most serious side effects of methamphetamine abuse. Overtime your heart may weaken and become enlarged, leading to less blood flow to vital organs especially the brain. This can lead to stroke.

The heart may also begin to flutter. This fluttering is just as dangerous as when your heart beats too slowly, because it also means that sufficient blood is not being pumped to your organs. The result may also be organ failure.

While trying meth may seem like one of the safest ways to explore drugs, it can be deceptive. The results are just as deadly as other forms of addiction. Meth abuse can and has lead to death in severe cases. If you become addicted to meth, you will need professional help to fight your addiction.