Signs of Ecstasy Use

Ecstasy, or Molly, is a psychoactive drug that changes the way the brain works. If you are concerned that someone you know may be using ecstasy, look for these signs of ecstasy use.

Where Do People Use Ecstasy?

Ecstasy is a often called a “club drug” because of the way it was used at raves, or large parties with electronic music, drug use, and dancing. However, recent use of ecstasy is not just confined to clubs and raves. According to CESAR, “abuse at house parties, college dorms and various other places have become more widespread.” Because ecstasy is a stimulant drug with hallucinogenic effects, people use it to let loose and be less inhibited. This is why people who use ecstasy often usually do things that they would not normally do when off the drug.

As stated by the NHTSA, other names for ecstasy are:

Physical Signs of Ecstasy Use 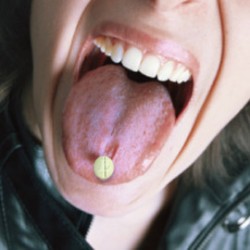 Someone who is taking ecstasy may be high in energy, have blurred vision, large pupils, and a fast heart rate.

As stated by CESAR, some of the physical side effects of ecstasy use in the short term are:

These are all signs that a person is currently high on ecstasy. The NIDA states, “MDMA can have many of the same physical effects as other stimulants like cocaine and amphetamines.” In the long-term, ecstasy use can cause sleep problems as well.

Behavioral Signs of Ecstasy Use

Ecstasy is a stimulant drug, so the person using it will be alert, awake, and may act strangely or see strange things. Ecstasy can cause these behavioral signs when the person is currently using the drug:

Ecstasy use can often cause people to engage in unsafe sex, to make poor decisions, and use poor judgement. The NIDA states that “the surge of serotonin caused by taking MDMA depletes the brain of this important chemical.” This can cause a person to experience strong, negative effects after taking ecstasy such as:

A woman who is abusing ecstasy will act strangely do to the use of the drug. But if she is abusing it often, she may become addicted to the drug. Ecstasy does cause cravings, and people often continue to do it even after it causes real problems in their lives. These are some of the key issues associated with addiction. Women who are addicted to ecstasy will likely:

There are many signs that point to ecstasy use. If you notice a friend or loved one who you believe may be abusing ecstasy, talk to them and, if necessary, seek help.