According to the DOJ, “Since 2009, hydrocodone has been the second most frequently encountered pharmaceutical in drug evidence submitted to federal, state, and local forensic laboratories.” One of the most commonly abused forms of this substance is as the brand name, prescription drug Vicodin. When a woman is abusing Vicodin, she will exhibit many signs of that point to her drug misuse, and being able to recognize these evidential effects can allow you to help her get the treatment she needs.

“Most often these drugs are abused by oral rather than intravenous administration” (DEA). This is because many individuals who obtain them for the purposes of abuse are not heroin users but people with stressful careers, families, and other important demands on their time. Women who take these drugs in high doses often do so because they provide a calming, euphoric effect. Over time, they may become addicted to this effect.

Some of the common behavioral signs caused by Vicodin abuse include: 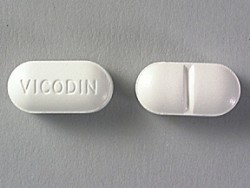 Vicodin abuse can cause confusion and anxiety.

Women who abuse Vicodin also try to get more of the drug in any way they can. If they originally were prescribed the medication as part of a treatment regimen, they may fake prescriptions in order to keep receiving it. In some cases, they may go from doctor to doctor, attempting to get more of the drug or even buy it illegally. Many women obtain their Vicodin through “illicit Internet sources” or through friends and acquaintances.

According to the NLM, “Hydrocodone combination products may cause side effects,” especially Vicodin which combines hydrocodone and acetaminophen. For example, taking high doses of Vicodin over a prolonged period can cause jaundice, a yellowing of the eyes and skin which can be caused by an overdose of acetaminophen. However, most other physical side effects caused by Vicodin abuse are a result of the hydrocodone present in the drug.

These physical warning signs of Vicodin abuse include:

Constricted pupils are also common among Vicodin abusers. This can be seen when the person’s pupils become smaller as the result of a Vicodin high. When a person has overdosed on the drug, her pupils will become so small that they resemble the head of a pin, called pinpoint pupils.

Hydrocodone overdose can be deadly. The drug causes slowed breathing which is a sign of abuse as well, but when the medication is taken in high doses, it can cause breathing to stop entirely, resulting in brain damage and even death. It is important to watch for the sign of slowed breathing, as it can lead to dangerous results.

If you notice any of these signs in a woman you know (or if you hear her complain of them), seek treatment immediately. Vicodin can become a deadly drug when abused, and these signs can help warn you before any dangerous results occur.