Within the last decade, opiate-based drug addictions have taken center stage with scores of people getting hooked on prescription pain relief medications. Oxycodone ranks as one of the most addictive opiates on the market. 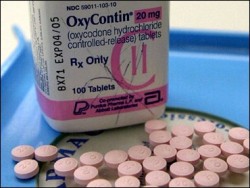 Opiate drugs as group are known for their ability to interfere with brain chemical outputs. As one of the more potent drugs in this group, oxycodone causes considerable disruption within the brain’s overall chemical system.

Oxycodone’s effects target the brain cells responsible for secreting dopamine and serotonin neurotransmitter chemicals, according to the University of Maryland. Neurotransmitters act as chemical messengers, relaying information from one area of the brain to another. Oxycodone causes brain cells to secrete unusually large amounts of these chemicals.

Oxycodone use as a pain treatment comes with certain drawbacks that ultimately predispose a person to oxycodone abuse practices. In effect, oxycodone’s effects only muffle pain sensations while the actual pain source remains unaffected. This mechanism of action automatically places a person at risk, even when following prescription guidelines.

When used for recreational purposes, oxycodone’s pain-relieving effects help to relieve any emotional and/or psychological turmoil a person may be experiencing. As a recreational drug, oxycodone’s effects on brain chemistry operate on a completely different level, as users tend to ingest the drug on an “as-needed” basis. Under these conditions, signs of oxycodone abuse develop at a much faster rate.

Short of going to the doctor and being switched to a different medication, the only way of counteracting tolerance level increases is to take larger doses of the drug, which is what many people do. While effective, this short-term remedy begins the downward spiral into dependency and addiction.

Signs of physical dependency can vary depending on a person’s overall health status. This means, people with pre-existing medical ailments, such as digestive problems, a weak immune system or even a condition like diabetes, will likely experience increasingly more dysfunction in these areas.

Over time, signs of physical dependency can take any number of forms, some of which include –

As always, normal mental health relies heavily on an ongoing chemical equilibrium in the brain. Much like the effects of oxycodone abuse warp physical bodily processes, it can do even more damage within a person’s psychological make-up.

With brain cells secreting unusually high levels of neurotransmitter chemicals on an ongoing basis, it’s only a matter of time before the brain becomes depleted and unable to produce needed neurotransmitter supplies. The effects of oxycodone abuse on the brain’s reward system also come into play as this region relies heavily on stable dopamine level outputs.

The brain’s reward system dictates learning and motivation processes. In effect, surges in dopamine levels work to reconfigure this system. Before long, oxycodone abuse will drive a person to organize his or her entire lifestyle around getting and using the drug, according to Loyola University.

Signs of psychological dependency typically take the form of –

When to Consider Getting Help

As telltale signs of oxycodone abuse tend to develop gradually over time, it’s often difficult for users to spot these signs on their own. More oftentimes than not, friends and loved ones will pick up on signs of drug abuse before the actual drug user does.

Ultimately, the negative consequences brought on by ongoing drug use become the best indicators that a person needs professional treatment help. As oxycodone’s effects will only worsen with continued use, the sooner a person gets help the better.

Without needed treatment help, users remain inside a self-perpetuating cycle of addiction. Serious medical and psychological disorders start to develop leaving a person in an even more vulnerable state in terms of the drug’s effects on his or her life.