Millions of people are able to use of alcohol to celebrate, socialize, or relax without ever suffering the complications of Alcohol Addiction, but millions more have experienced its harsh effects. Alcohol Addiction involves consuming alcohol uncontrollably, and compulsively, being preoccupied with alcohol, drinking in unacceptable places, or at unacceptable times, and continuing to use alcohol despite negative consequences. It has its own special name, alcoholism. There is a vast amount of knowledge about alcoholism and although every person is different, the following 5 signs are common indicators that an Alcohol Addiction exists.

1- Alcohol Abuse: Alcohol abuse can be recognized by increased usage frequencies and quantities. Someone abusing alcohol may exhibit behaviors such as binge drinking or drinking uncontrollably. They may drink at places or during events where others find it unacceptable. They may also set aside a time to drink where they will be undisturbed or they may drink when they are depressed and try to hide their alcohol use.

2- Tolerance and Dependency: It may begin with an occasional drink, but soon one needs to consume more alcohol to get the same effect. This is called a tolerance. After long term, or frequent use, the person becomes dependent on alcohol to balance out neurotransmitter activities in the brain and central nervous system for even the most basic functions. When they cease consumption, they may be shaky or dizzy and have nausea or increased blood pressure as a result of alcohol withdrawals. 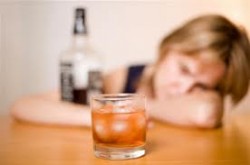 Growing dependent on alcohol and being unable to stop drinking is a sign of addiction.

3- Instability: Alcohol Addiction leads to much instability when the person loses their self control. It can cause damage to relationships, damage to other family members, damage finances or living arrangements, damage employment relations or other opportunities, and it can cause them to act in dangerous ways such as driving while drinking, or committing other acts of harm to themselves or others. According to the National Institute on Alcohol Abuse and Alcoholism, “Alcoholism is the 3rd leading cause of preventable deaths in the United States”.

4- Mental Health Problems: It’s a very progressive disease that makes a mark on the person’s mental health and changes their behavior patterns by placing them in unwanted predicaments or causing them to exhibit unwanted behaviors. People who suffer from Alcohol Addiction often present other mental health disorders such as anxiety and depression. Their minds have been affected by the alcohol use and they may become aggressive, violent, angry, extremely irritable or even suicidal. They may withdraw from family situations or avoid activities that were pleasurable before. In chronic cases, alcohol causes psychotic episodes of deliriums, hallucinations, or other serious problems.

5-Physical Impairments: Alcohol is a toxic chemical which after repeated use disrupts the normal functions within the body and causing an untold number of physical impairments including liver diseases, cardiac problems, respiratory infections, neurological problems, and brain damage.