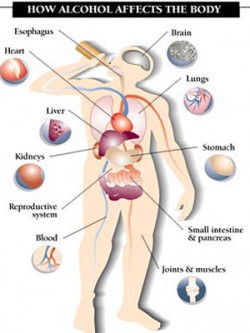 Alcohol has very serious detrimental effects on the body.

Alcohol has a long history of use and acceptance in most all cultures. Alcohol also carries certain medicinal properties, as evidenced by its use in cough syrups and antiseptic agents.

The widespread acceptance of alcohol consumption has led more than a few unsuspecting drinkers down the road to alcoholism. While many people can drink on occasion without experiencing negative consequences, others become trapped inside a cycle of alcohol abuse and addiction.

According to West Virginia University, alcohol abuse can take different forms, all of which can lead to alcohol addiction. In effect, anyone who abuses alcohol on continuous basis will likely experience the long term effects of alcohol. The first noticeable stage of alcohol abuse takes shape once the body becomes dependent on alcohol’s effects to function normally.

Binge drinkers may experience adverse effects from drinking without necessarily becoming dependent. In cases where a person binge drinks on a frequent basis, the risk of dependency and addiction increase considerably.

As addiction has more to do with a person’s belief in the “need” for alcohol to function normally, problem drinkers have likely developed a full-blown addiction.

The long term effects of alcohol stem from the body’s physical dependence on alcohol’s effects. Alcohol dependency can develop over the course of months or years depending on how often a person drinks and the amounts normally consumed. In effect, alcohol can cause widespread deterioration of brain cells as wells as bodily structures and functions.

According to the Centers for Disease Control & Prevention, the long term effects of alcohol on a person’s health include –

According to the University of Washington, the long term effects of alcohol inevitably affect a person’s psychological stability as alcohol alters chemical processes in the brain. In turn, the brain naturally adapts to alcohol’s effects, which enables a person to drink increasingly larger amounts of alcohol over time.

Psychological conditions resulting from the long term effects of alcohol include –

According to the Medical University of South Carolina, depression and anxiety disorders affect one out of every three alcoholics. Likewise, major depressive disorders are four times more likely in alcoholics compared to non-drinkers.

Much like the physical effects of alcohol abuse breed continued drinking, someone suffering from depression or anxiety symptoms will likely continue drinking in an attempt to self-medicate his or her symptoms.