Women in Rehab; Unique Needs and Roles that Females in Recovery Face Each Day

Women with substance use disorders face financial, medical, social, and emotional consequences and costs, as do their families and society as a whole. It’s important for people to understand the context in which an addiction develops. There are specific circumstances that are more likely to affect female substance abusers and these need to be acknowledged and incorporated into treatment and recovery.

Women’s rehab is the treatment option most likely to understand the context of female addiction and its effects on treatment. Because the staff at a rehab for women spend their time learning about female addiction in depth, they are more familiar with the unique needs of a female addict than a facility that treats both genders can be. Addiction treatment has a tendency to default to the needs and experiences of men and that’s not what women need.

By calling 800-681-7642 Who Answers?, you can speak with an expert who knows exactly what you are going through. He or she will answer all of your questions and highlight the advantages of a gender-specific treatment program. It’s time your distinctive needs were respected.

The Role of Mental Illness 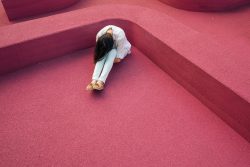 Women have higher rates of anxiety and other mood disorders than men.

Both with and without being diagnosed with addiction, women consistently have higher rates of lifetime anxiety and mood disorders. When a person has an addiction and another disorder, like depression, it is called a dual diagnosis and the conditions may be called co-occurring or comorbid.

Chronic drug and alcohol use can enhance a woman’s vulnerability to these conditions or lead to natural changes that manifest as a mental disorder. The following situations all points to an independent anxiety or mood disorder:

During recovery, an independent anxiety or mood disorder remains and women used to self-medicating with drugs and/or alcohol may find it difficult to cope without them. Therefore, women in recovery are more likely than men to struggle with the weight of a mental disorder. This puts them at an increased likelihood of relapse.

The Role of Eating Disorders

Treatment for these women is complex and multidisciplinary, using methods like medication supervision and nutritional counselling. However, there are no evidence-based treatment approaches. Unfortunately, women who present with an eating disorder and a substance use disorder typically find themselves in a program with expertise in one or the other. Rarely, do they have expertise in both.

The Role of Post-traumatic Stress Disorder

Unfortunately, the rate of women exposed to violence among those diagnosed with a substance use disorder is quite high: 55-99 percent of them. Many of these women manifest symptoms that are consistent with post-traumatic stress disorder.

As with eating disorders, there is no evidence-based treatment approach, but experts generally agree that both should be attended to simultaneously. Because many drug and alcohol users do so to cope with the trauma symptoms, treating the post-traumatic stress disorder early on may allow women to be more successful in their addiction treatment.

Women in recovery not only battle with addiction, they battle with other conditions as well. One way to learn coping mechanisms is to attend a women’s rehab. As these situations are unique to women, they deserve to be treated by people truly focused on the needs and circumstances of the female addict. Call 800-681-7642 Who Answers? to learn more.